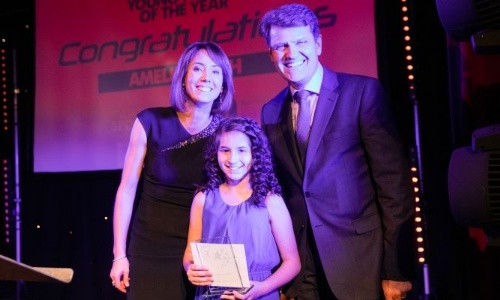 26th October 2017. We are delighted to announce that the winner of this years One In A Million Arts Young Person of the Year Award 2017 is Amelia Smith. Congratulations Amelia, we celebrate you and your achievements. Here’s why...

“Loyal. Kind. Infectious personality! She’s a role model to others and demonstrates compassion and integrity to everyone, way beyond her 11 years of age”.

Amelia loves coming to One In A Million and has been attending our Windhill community hub for over 3 years.

We first met her whilst Danny Forrest, Community Activator for One In A Million, was doing his Physical Activity, Health and Wellbeing placement at Christ Church. He told her family about our Kidz Clubs. Amelia and her sister, Amber, have been coming ever since.

Whilst attending the One In A Million Kidz Club, in Windhill, Amelia has engaged in a number life enriching activities including: ‘Cook & Eat’, ‘Arts and Crafts’, ‘Music Tech’ using Apple technology, ‘Sports Leaders Award’, ‘Be Someone’ - a unit of the Lord Mayors Award and ‘dance taster’ programme - it was here that she began to develop a love for dance. So, she decided to join the One In A Million dance development group. However, this was considerably later in time than her sister and friends - initially due to a low level of self-esteem.

However, after bundles of encouragement from our enthusiastic dance coach, Amelia quickly began to learn the routines. Her colourful personality quickly helped her to make friends with the other children in attendance from our 5 community hubs.

In the last year, it has been our joy to see Amelia flourish in her confidence and self-esteem, culminating in her performance to a room full of 350 strangers at the One In A Million Stars Awards last year. She has since performed at events across Bradford. Despite, her youthful years, Amelia is developing a breadth of skills that one day, she says, will make her a great coach for One In A Million!

Amelia lights up any room with her presence. She is a joy to be around. She is maturing into an independent thinker and a positive role model to others.

Congratulations Amelia. You are the deserving winner of the OIAM Arts Young Person of the Year Award 2017!