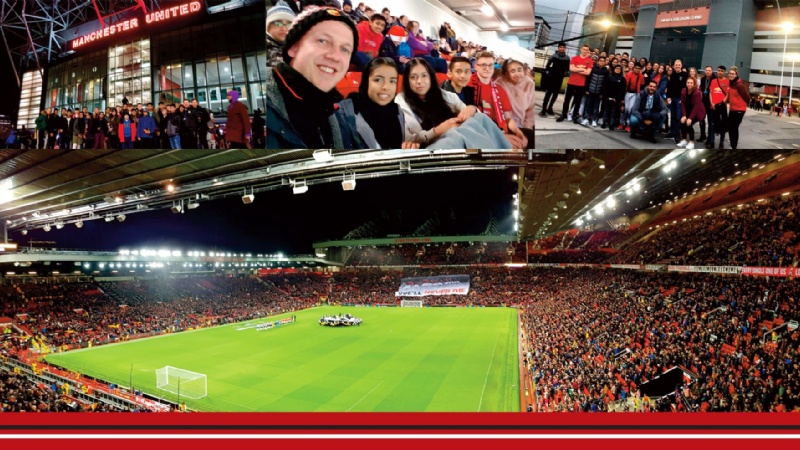 19th Dec 2019. During this term, our students have enjoyed many fantastic rewards but by far the most popular has been the opportunities to go and watch Manchester United at Old Trafford.

All of the games that we have attended so far were free of charge to the school. This is a fantastic offer for a small mainstream secondary school like ours, and we are hugely grateful to Manchester United. Thank you! For many these trips have represented a threshold experience.

Mr Butterfield, (MFL Teacher) said, “Overall, it has been amazing to be able to take our students that consistently get things right at school, and see them enjoy an experience that they otherwise may not get the chance to witness. As an example, 23 of the 29 students on the first trip told us that they had never been to a football game before! I think we even managed to recruit a few new Manchester United fans in the process (great news for me personally). Every single student expressed how much they enjoyed attending the games as a reward, and all of them came to thank me personally for taking them, which demonstrates why they have earned the reward in the first place”.

Syeda H (Yr 11): “This was the best night ever. Man Utd till I die!”. Salman B (Yr 11): “I didn’t use to support any team but now I’m definitely a Manchester United fan”. Maleehah A (Yr 8): “I loved watching the women’s football. They are so inspirational to a fellow player like me”. (Maleehah is one of our star players at school and knew almost all the team members at the MUFC women’s game. She also attended the men’s games due to her exemplary behaviour and attendance throughout the year).

We are hugely grateful to One In A Million community partner, Bradford City AFC, who have also made tickets available as rewards for students in our school. As you can imagine, given where our school is located, these opportunities will become very popular for students to earn the chance to go and cheer on the ‘Bantams’!

We have lots more exciting sporting experiences scheduled in the new year including going to watch ‘Sheffield Sharks Vs Manchester Giants’ in the British Basketball League, and tickets to watch ‘Manchester Storm Vs Nottingham Panthers’ in Ice Hockey League.

Here’s to creating many more special memories for all of our students in 2020!